Leaders are defined by the decisions they make AND their ability to implement. 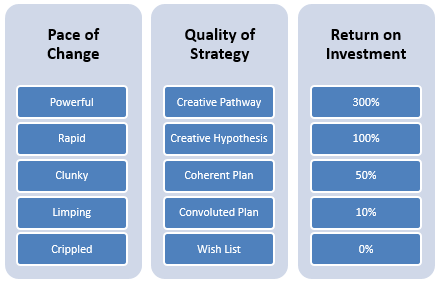 A Game Plan for Building a More Intelligent Enterprise

The only thing between you and a smarter-faster organisation is the mountain of decisions you and your staff are making every day.  Some decisions are tiny, others game changing.

Every wrong or poor decision slows down your organisation.  Yes, agile business leaders like yourself compensate by being decisive, ready to adapt and by being resilient. The trouble is not everyone in your organisation is just like you.  And, you can’t make every decision for them as that will slow the organisation down even more.

What about a process that takes care of both? Wouldn’t that create powerful change?

The MCI strategic planning process is THE process you need. It is the secret to a strategy that is your creative pathway to the future you can envision. M stands for Motivation, C stands for Clarification and I stands for Implementation.

The biggest mistake in strategy development is we move straight to implementation as soon as our creative or analytical processes births a new idea.  The MCI process flips this on its head.

Motivation – It starts with ensuring you are answering the right question. Confirmation of Purpose and the drivers of your motivation.

Clarification – Next you identify and breakdown the natural blockers to clear decision making that are created by your motivation.

Implementation – Once you have clarified your strategy you design the creators of your destiny. The leaders, the teams, the skilled individuals and the processes, systems and assets you will need to deliver.

If you want to know more, the MCI strategic planning process is the subject of my book DECIDE How to Manage the Risk in Your Decision Making.

DECIDE: How to Manage the Risk in your Decision Making

Register now for our next thought-provoking webinar.
Register

"Bryan is Australia’s leading thinker on decision making. Unlike just about everyone in business he actually understands risk, and how to evaluate and manage it. As well as a depth of expertise and experience, Bryan is also generous, funny and is a man of deep integrity. If you get the chance to work with Bryan grab it with both hands."

"I have used Bryan Whitefield as an advisor, consultant and facilitator for more than ten years.  The New Zealand Local Authority Protection Programme Disaster Fund has used Bryan’s services for more than twenty years.

Bryan’s skill as a facilitator is that he keeps the meeting focused, he steers the group to make decisions, and he gets those decisions recorded.  In part this happens because he comes to these meetings having done his homework, but also because he has the rare skill of keeping everyone engaged and finding consensus where many would not be able to do so."

"The Local Authority Protection Programme (LAPP), a charitable trust in New Zealand created to assist member local governments finance the rebuilding of underground assets catastrophically damaged in natural disasters, including playing a major role in assisting councils that suffered immense damage in the Christchurch earthquakes, held a Strategic Planning Meeting on 2nd May 2016.

Bryan Whitefield was engaged to prepare for, plan, manage and facilitate the day.  His preparation was meticulous and the day successful. Bryan demonstrated  a complete understanding of the issues confronting LAPP. His facilitation was first-class and stimulated a high level of participation by creating a relaxed, lively environment.  The meeting finished in a timely manner with all participants satisfied that all opinions had been covered. Bryan’s final report was comprehensive, timely and will become an important planning document for the future.

It was a successful exercise significantly enhanced by the expertise and skill of Bryan."

“Bryan applied his decision making framework while facilitating our Hands Across the Water Board 3-day Strategic Planning session. We had some big decisions to make, to decide the future of our charity, and it was remarkable how well he held the room through the three days. He steered the 6 of us to make decisions which will affect Hands, I am sure very positively, for years to come.”

Peter Baines, OAM, Chair and Founder, Hands Across the Water

"Usually I'm quite decisive. However I'd been wrestling with a major business decision for some time and it was causing me a great deal of frustration. When I sought Bryan's help I wasn't sure what to expect, but his Think it Through Decision Making Program was just what I needed. The different perspectives he guided me through provided several "aha" moments and clarified the way forward. The certainty with which I was able to make the decision has stayed with me since and I am grateful for his help. I would challenge anyone to remain indecisive after going through this process."