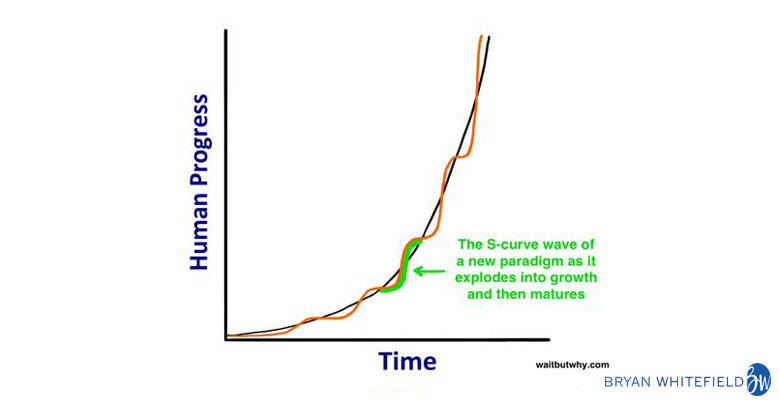 Those of you that know your maths know that an S-Curve can have an exponential portion to its curve but it can’t BE an exponential curve. However, I recently came across a diagram showing a series of S-curves overlaying an exponential curve which to me portrayed something very different to seeing either in isolation. It was in this post by Tim Urban The AI Revolution: The Road to Superintelligence.

I am bringing this to your attention for two reasons. The first reason is to add to your appreciation of the debate on the pending impact of Artificial Intelligence. The incredible increase in complexity that we will all have to deal with.

While Urban’s article is lacking in hard evidence he puts forward a compelling argument about the pace of change. For example he says futurist Ray Kurzweil predicts that the “progress” made in this century will be 1,000 times the progress in the last. An exponential rate of change.

The second reason I’m blogging about Urban’s post is because his approach is a wonderful example of how to influence by painting a picture worth a thousand words. When I teach influencing skills in my Persuasive Adviser Program I introduce participants to my Pathfinder Model. It is a four-step process of which Paint them a Picture is a crucial step. In it I introduce the use of S-curves and exponential curves to convey various meanings. Now I have another example of when a series of smaller step changes are actually representative of a much more significant exponential change. Brilliant!