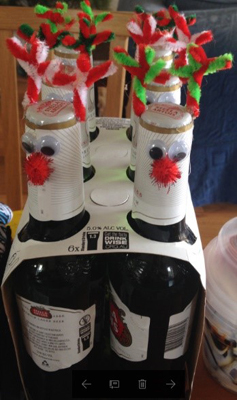 Last week I wrote that to be as persuasive as you can be, you should stop pushing and start pulling. I took Robert Cialdini’s six principles of persuasion, reworded and rearranged them a tad and then put them in a hierarchical order of persuasiveness.

In my book, Winning Conversations: How to turn red tape into blue ribbon, I tell a story about my daughter, Emily, to demonstrate how simply one can find ways to implement pull strategies. No better than a teenage girl, right?

“It was Christmas Day, when Emily was 15, and the present giving was almost over. Torn wrapping paper lay everywhere. My son Doug, who was playing Santa Claus, passed me a weighty parcel with a card that read ‘To Dad, Love Emily’. I pulled off the colourful paper and opened the box inside, to find six perfectly crafted ‘Reinbeers’. Emily had taken a six-pack of Stella Artois beer and transformed them into a team of reindeer. On each bottle she had glued a fluffy red nose, funny little eyes with irises that rattled when shaken, and red, green and white antlers fashioned from pipe cleaners.”

With this act of love and kindness, Emily had utilised multiple persuasion strategies all at once (hopefully not consciously!) For example, she used scarcity. I was the proud owner of six reinbeers. And there were only six. However, it is not like she was saying take them or leave them so it was a great use of scarcity. And of course she had nailed desirability. She had combined two things I love: Beer and creativity.

Now stop and think about the last meeting you had when you were trying to persuade someone. Did you utilise one or more of the six principles? Did you use push or pull strategies? How could you have been more creative?

If you have a good story for me and my readers, please send it to me. I, for one, would love to hear it.